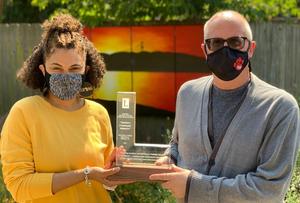 “The Lasallian school is a united community where diversity is respected. Individuals within the school community recognize and accept another’s strengths and limitations. This core principle is expressed through the Lasallian ideal: ‘The Lasallian Family.”

The quote above is one of the five Lasallian Core Principles which helps us guide our mission. More specifically, this principle highlights the idea of an inclusive community, which is the foundation of the Saint Mary’s Inclusive Community Program. Initiated in 2015 by Lawrence Puck ‘78, who had envisioned it for years, the idea of bringing students together has been going on even before the program began. As Lawrence Puck, President, explains, “Saint Mary’s has created a program and opportunities where students can come together outside of the traditional classroom, learn about one another, and celebrate it in the true Lasallian tradition.” While also giving the student community voice a chance to be heard, the Inclusive Community Program works as a tool to educate on identifying concern for social justice. In 2016 the program developed into a senior project led by Ms. Alexsandra Walton, Director of Integral Programs and the Inclusive Community Coordinator. Seniors led Community Block sessions for their fellow senior classmates covering the topics of leaving the Bay Area and moving into different social, economical, and racial environments. The following year it expanded to cover more topics surrounding economic, political, and social injustices in our country and around the world. The Inclusive Community Program, within its education on inclusivity and social justice, strives to help students communicate, process, and heal from current events within the community and the world. For example, in 2017 as a response to the 2016 presidential election, the program focused on demystifying assumptions around democratic and republican parties. Rather than focusing on all the negativity generated towards one’s choice in a political party, Saint Mary’s students came together to understand both sides in a peaceful and respectful manner. In addition, the program developed a way to make these discussions on social justice more available to the entire student community by creating the Brown Bag Lunch series. This series involves students getting together once a week to discuss different topics during lunchtime, while at the same time, focusing on building allyship and listeners within the group. The day before a Brown Bag, those students who identify with the chosen topic gather together and discuss what they want to share and what they hope their allies will learn.

Over the Summer of 2020, 18 faculty members participated in weekly Inclusive Community Zoom meetings led by Ms. Walton. These meetings revolved around crafting authentic and collaborative programs to promote inclusiveness and open mindedness in hopes of developing a higher consciousness about the diverse walks of life on our campus and around the world. By dedicating their time to first educate themselves on topics dealing with inclusivity, this driven group of faculty members will now have the tools to help lead Brown Bag discussions.

In the current Fall trimester, the Inclusive Community program at Saint Mary’s still hosts Brown Bag Lunches for students to share and express their feelings, experiences, and emotions during these new times of Distance Learning. Weekly Brown Bag discussions have taken place via Zoom. The first Brown Bag Lunch covered the topic of Growing Up Jewish in America. The following week, the Brown Bag covered Growing Up Latinx in America. Both were very successful and had great student turnout and participation considering the new Zoom format.

Given our racially polarized climate, Growing Up African American in America was created next in response to current events, such as the Black Lives Matter movement. The severity of the recent events around this topic also caused this specific Brown Bag discussion to be turned into a multi part series in order to allow for density of the discussion and student voices. Ms. Walton explains, “we are having the topic, Growing Up African American In America, after the shooting of Breonna Taylor and more. We are hurting, we need to have healing, and we need to talk. The fact that we have the Brown Bag series ready, means we can just call one fast and help the students talk, process, and heal.” It was a great start to the month of October and gave students the chance to cover such an intense topic as a multi part series lasting two weeks. After its completion, Ms. Walton comments, "As with all of our Brown Bags, hearing the student voice is so important. Growing Up African American in America allowed student voice to be heard and for the community to get a true understanding of how Saint Mary's students who identify as African American/Black are feeling right now. Additionally, the number of allies who attended in support was beautiful." The following weeks of October covered Growing up LGBTQ+, in honor of October being LGBTQ+ history month, and Growing up Asian in America in response to the increased stigmas associated with Covid-19. These Brown Bag discussions will continue throughout the school year.

Since its creation in 2015, the Inclusive Community Program has grown with immense strength. Saint Mary’s is proud of all the program has achieved in offering an outlet for topics to be voiced by students in discussions led by trained faculty members. In February of 2020 the Inclusive Community Program received the Brother Michael Collins Award of Excellence for the District of San Francisco New Orleans. Today, the program continues to build allyship and trust within Saint Mary’s faculty, staff and students, while at the same time allowing all different voices to be heard in the true Lasallian tradition of an inclusive community and respect for all persons.