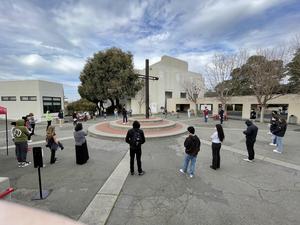 During the Pandemic, Saint Mary's retreats takes on a new look.

The winter trimester entered its third and fourth week at Saint Mary’s with a strong continuation of Lasallian Days, allowing students to arrive on campus to meet with teachers, faculty members, and club leaders by appointment. These activities are conducted in a socially distant manner outdoors in order to preserve the health and safety of both students and faculty members. On Thursday, January 21st, these Lasallian Days were transformed for the senior class to provide them with an opportunity to experience Senior Retreat. The theme of the retreat was JOURNEY, allowing seniors to reflect on where they were in their lives in the past, where they are now, and where they envision themselves to be in the future. Mr. Jeremy Marks, one of the retreat coordinators and Faith in the Modern World teacher, emphasized, “Even though their lives have been altered by the pandemic, it doesn’t make their journey less valuable...this retreat has allowed them to reflect on their own personal development over the course of their four years at Saint Mary’s, how their sense of self has changed during this pandemic, and how they see themselves growing in the future.” Ms. Susan Flowers, one of the retreat coordinators and the Co-Director of Ministry at Saint Mary’s, organized an activity where seniors wrote a handwritten letter entitled “Dear COVID,” which allowed for self-reflection on their lives during these unprecedented times. Ms. Flowers explained, “this activity not only allowed the seniors to reflect on their journey at Saint Mary’s, but also realize that the pandemic is a minor obstacle, providing them with hope that they will overcome this obstacle and fulfill their individual future aspirations.” Continuing after the seniors, on Thursday, February 4th, the junior class participated in their Junior Retreat where they reflected on the two major themes, Choices and Discernment. Junior year is the moment in a student’s life where they reflect on their own personal identity and the relationships they currently have with others. It is also a time in a student’s life where they think about the major decisions they must eventually make that will heavily impact their future. Ms. Flowers added, “we wanted them to have a chance to explore through prayer, introspection, and group activity how their choices affect others, where their love and passions overlap with their skills and talents, and who else in their community is faced with similar choices themselves.” What was also discussed during the retreat was how the pandemic has played a pivotal role in these students’ lives and their future decisions. Ms. Flowers also stated that “part of our exercise was acknowledging how much their view of the world and of themselves may have changed in the events of the past year, and how that might have shifted their future decisions.” This allowed for further reflection and discussion on where these students see themselves in the years to come in terms of their own personal growth and development. Mr. Michael Pacheco, Faith in the Modern World teacher and another one of the retreat coordinators, discussed the atmosphere amongst the junior class: “We could tell that they missed being around one another...it was heart-warming to see and hear the class share their excitement and concerns about what is to come in their futures. I hope that this small time to reflect allowed them to reflect not only on their junior year, but also prepare them for what is to come their senior year.” We would like to give a big thank you to Ms. Flowers, Mr. Marks, and Mr. Pacheco for coordinating and leading these retreats.